It’s not just the distant cousin of sales anymore. eCommerce is large, in charge and taking over as the most viable option to conduct sales. How can it be so unstoppable? Because there are no limitations to eCommerce. The Internet is everywhere in this world and with an online business, so are you. Short of a worldwide nuclear barrage, the Internet will maintain in the foreseeable future. In 2008, over $130 billion dollars was spent in products and services through e-commerce websites and in 2013, the experts predict that number will be a lot closer to $200 billion, if not over it. If that doesn’t convince you, then, by all means, keep reading, as the information below surely will.

In 2009, a lot happened and almost none of it had an adverse effect on eCommerce. Let’s not beat around the bush, there was a serious recession. Thousands of jobs were lost, local businesses fell like a house of cards, mortgages jumped through the roof and the effects cascaded through our social and economic structure like falling dominoes. One side effect that clearly outlines how bad it was for normal retail stores was the rise in redeemed coupons. Their usage in the United States hit its peak in 2009, with redemption rates at its highest levels since 1992. That’s almost 20 years ago. Meanwhile, eCommerce neither lost nor gained momentum. It retained the consistency of 2008 and online businesses remained unaffected for the most part.

The economic bounce-back, since then, has mostly been viewed in the realms of e-commerce storefronts and other online businesses. With the emergence of social media’s legitimacy, the results and future expectations of e-commerce are bigger than ever. What used to be a medium that was fun to dabble in 2008 has now become a full-fledged arm of companies’ communications efforts. People spend more time on social media sites than their email now. Advertising is more effective and a hell of a lot cheaper online, than it is on television and companies have really started to embrace this fact wholeheartedly. Customers demand instant gratification and that is exactly what your business can deliver if it’s online. 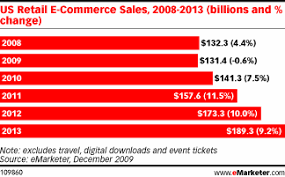 More and more sites are added to the web each and every day. This makes it more and more important for you to rise above the clutter to attract customers to your store. E-commerce development for your website is more important than ever and has become an industry unto itself. Top of the industry software packages like the ones offered by Miva Merchant are being implemented on thousands of websites. Open source commerce (OSCommerce) is just as popular. E-commerce and OSCommerce experts are taking on more clients than ever. Web marketing gurus are seeing an exponentially growing demand for online marketing strategies to carve out a slice of the online marketplace pie for their clients. One of the best ways to do this is through paid search and search engine optimization (SEO) tactics. Forrester Research reports that almost 80% of all companies expect to increase SEO spend over the next three years. Over 60% expect to increase paid search dollars.

Online holiday sales skyrocketed this year, despite the previously mentioned “R word.” More and more people went online to make their purchases and confidence in online shopping is on the rise. The estimates for e-commerce sales this year are in the range of $140 billion, about 7.5% growth from last year. It is impossible to argue with that type of progress, so find a team of professional e-commerce developers and get your business online already.

Your payment gateway is more than a piece of eCommerce technology. It is the critical piece of your user experience; the bridge that connects user interest to profitable action. A recognizable, secure, and convenient payment gateway can build trust with...

With everything going on in the world, it can sometimes be hard to see the glass as half full versus half empty. But the reality is that there are new opportunities that come with dramatic changes to the economy and...